At John’s inaugural address to Convocation as Provost in 1982, he spoke on “The Care and Feeding of the Humanities in a Cold Climate.” In this address, he argued that the Humanities “are in no way a training for any profession but rather a training to think, learn and express oneself clearly.” John’s passion for the liberal arts continued throughout his tenure at Thorneloe, and its impact is still prominent today, continuing to guide our academic mission and work.

After his time at Thorneloe ended in 1991, John and Sheila settled in Victoria, BC. During that time, John remained an active member of the Canadian Society of Biblical Studies, an academic society where I first encountered John.

John and Sheila attended Thorneloe’s Convocation last October, where I had the pleasure of chatting with John, along with former President and Provost, the Rt. Rev. Dr. Stephen Andrews. 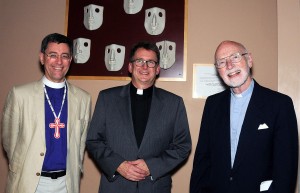 Funeral arrangements and an obituary have not yet been released. Please keep John’s wife Sheila and their family in your thoughts and prayers.